Posted on November 24, 2009 by Dallas. Filed under Entrusted With Arrows and tagged as Answers to prayer, Greg, Music. 1 Comment.

We are very pleased that today we made arrangements with Jurgen Beck to be the composer of our documentary. Jurgen has a passion for the message of our film, which makes him a real partner in what we hope to accomplish. This is a very exciting development for us, as well as an answer to prayer. We are looking forward to working with him. You can check samples of his work at his website – http://www.jurgenbeck.com/.

Posted on August 26, 2009 by Dallas. Filed under Entrusted With Arrows and tagged as Answers to prayer, Greg. No Comments. 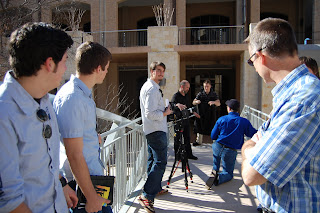 One goal for our documentary is to enter it in The San Antonio Christian Film Festival, which was to be held in February 2010. We expected an October submission deadline, so were on a tight time frame to complete this project. Yesterday the festival announced a change of dates, due to construction at the convention center. The festival will now take place in October 2010 and the submission deadline is now in June! The time pressure has now evaporated, but we still want to try to stick with our timeline so we can begin a new project in November. Now we are asking God whether we need a motorhome for this trip or not. We had planned on editing on the road in the motorhome. This still seems like a great idea, but not as urgent. We are looking for God’s provision and leading.

Posted on August 21, 2009 by Dallas. Filed under Entrusted With Arrows and tagged as Answers to prayer, Greg. No Comments.

The first miracle of our trip happened on the first day we arrived in Milk River. We were planning on camping at Writing on Stone Provincial Park near the Josts. We hadn’t realized that this year the park began accepting reservations through a new online system. When we turned off Highway 4, the sign to the park, which was still a half hour away, said “Campground Full.” If we didn’t stay at that park we would be commuting long distances, so we decided to see if it was completely full, praying as we drove. It was getting late when we got to the next turn-off. Again the sign read “Campground Full.” We decided to continue the last ten minutes to see if there was one spot available and speculated how God might make it so. We saw RVs leaving and thought they may have been turned away. When we arrived at the gate, the sign read “Campground Full.” We drove into the park to the registration office. She said there was nothing available, but would check her computer for the following night. When she did, she said, “I don’t believe it, someone just cancelled! I just turned someone else away five minutes ago.” This little answer to prayer saved us hours of driving to and from our visits to the Josts home. Thank you, Lord!